In anticipation of The Future Fire's upcoming Noir-themed issue, they've invited me for a conversation about my story "Siv Delfin" (2016), a Noir piece set in my Vasilegrad universe.

Posted by Damien Krsteski at 8:51 PM No comments:

My new story "Slow Eshtyca" is out now in GigaNotoSaurus.

The samohod drove Vilma half-way up the mountain before its engine began to struggle with the slope, coughing up plumes of soot. When the vehicle heaved its last gasoline breath, she abandoned it by the road and continued to the highlands on foot.

By dawn, she reached Slow Eshtyca; the village’s scattered houses were tucked behind hillocks and greeted her with boarded-up windows and yards bereft of livestock. The green fluorescence wafting out of the wells smeared into the salmon pink of the horizon, and Vilma had to squint to make out the girl’s house.

Posted by Damien Krsteski at 5:52 PM No comments:

My latest story "Esma's Margaret" is out now in the January 2021 issue of Metaphorosis Magazine. 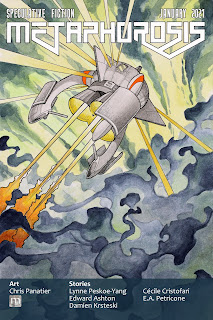 “Power’s out again,” Esma’s father shouted from the living room.

She lulled her computer into sleep mode to preserve battery now the mains were off, put on her backpack, and stormed out of their home. Her father shouted something else after her, but she couldn’t hear him—her feet were on the dirty Orizari street already. Late-night raucousness swallowed her whole: men playing cards on the sidewalks, cursing their bad luck or each other; cars, old diesel vehicles, whirring to-and-fro, spewing fumes not smelled elsewhere in the city of Skopje in twenty years; kids and their mothers and fathers, out playing, chatting, even at eleven in the evening.

Posted by Damien Krsteski at 3:27 PM No comments:

Short story "Petroglyphs" is out now in Every Day Fiction.

When their ships landed on the porous soil of Blue-and-a-Rock, the hatchlings rushed out to preserve the petroglyphs.

They moved like a flood: overrunning the fields and valleys of the moribund world, clogging up the caves, prodding with claws and feet at the remains of that which had so recently ended. Gales scattered the hatchlings across beaches where they drank the waters and sated themselves with sand; waves pushed them outward to distant islands and open seas; maelstroms pulled them down to dark ocean depths.

(Continue reading.)
Posted by Damien Krsteski at 5:09 PM No comments:

My post-apocalyptic story "The Trader" is out now in the Best Vegan Science Fiction & Fantasy 2019 anthology.

The story was originally published in the Score anthology last year. 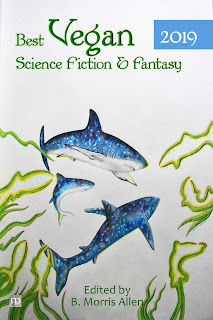 You can pick up a copy from Amazon.
Posted by Damien Krsteski at 2:24 PM No comments:

My latest short story "Bullies" out now in Theme of Absence. Alongside the story, a short author interview with me was published.

Tears came to Jon’s eyes, fogging up his smart specs; he took the glasses off, and the AI therapist slipped out of view. He flung his backpack against the concrete wall.

He was taking shallow breaths, so he made an effort to slow and deepen his breathing.

When he put his glasses back on, they notified him he was two minutes late for History, building B, classroom 12. He picked up his backpack, said, “I’m not feeling well,” to his specs, and headed home. In the background, his therapist informed the school and his parents, and purchased one tram ticket for him.

On the ride home, he watched the city in the tram’s window passing by, buildings, people, trees, materializing and disappearing frame by frame, and he thought of them the way he liked to think about everything: in matters of optimized CPU cycles, in graphics shaders, in the processing power made available once these complex geometries slipped out of view.

...continue reading.
Posted by Damien Krsteski at 7:50 PM No comments:

My short story "Garden", a musical and narrative collaboration with dark ambient musician Nanohex from 2017, is out now in the SubverCity Transmit podcast.

It is a fantastic production, with Nanohex's music playing in the background while the story is read, which is exactly how the project was intended to be experienced.

You can listen to the music and story wherever the SubverCity Transmit podcast is available, including Spotify and Apple Podcasts.
Posted by Damien Krsteski at 12:54 PM No comments:

My stories have appeared in Beneath Ceaseless Skies, GigaNotoSaurus, Metaphorosis, Mithila Review, The Future Fire, and others.

One of the Cities

The Definition of Johnny

All the Things Touched

Fuzzy the Way It Is

To The End of Time, Or Lisa

This work is licensed under a Creative Commons Attribution-NonCommercial-NoDerivs 3.0 Unported License.